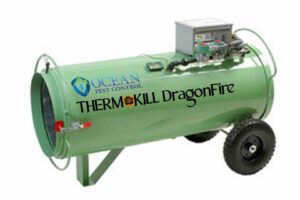 The common bed bug’s association with humans has been documented to date back to Egypt in 1336 BC – over 3,300 years ago. Although it is primarily a parasite of humans, it will feed on poultry, other mammals and birds. It gets its common name for its close association with our beds where it often seeks refuge during daylight, only to come out at night to feed on the bed’s occupants.

Beginning in the 1990’s, there has been a resurgence of bed bug cases in the United States. This is due to several factors:

Bed bugs will hide in cracks and crevices during the day. Their refuges include headboards, buttons and beading of mattresses and box springs, pleating of bed skirts and any crevice of the bedframe. Eventually, if left undetected and untreated, they will extend their hiding places to wall hangings, picture frames and mirrors, night stands, dressers, stuffed furniture, behind loose wallpaper, light switches, door and window frames, curtains/drapes, under carpets, baseboards and electrical outlet boxes.

Thermokill’s™ DragonFire is particularly suited for eliminating bed bug infestations. Our heat penetrates the cracks and crevices killing the adults, nymphs and the eggs. It will penetrate mattresses, box springs, sheets, upholstered/stuffed furniture, clothing in closets and drawers, bedside phones or clocks and other sensitive areas where aerosol, liquid or dust pesticides cannot be applied.

As a precautionary measure, Ocean Pest Control will also use a long lasting dust insecticide and inject it into the conduits behind light switches and wall outlets and other crevices in case any bed bugs tried to escape the heat treatment.